First of all, download and install Docker by following the instructions relative to your specific system. After you have installed and started the Docker service, download the Lightstreamer image from Docker Hub through the command:


Shortly after, you should see dynamic information about download progress, until the image will be completely downloaded and installed, as follows:

To verify your downloaded succeeded, check the availability of the image through the docker images command, which lists the mostly recently created images:

Now that the image is ready to be used, run the container with the default configuration, by simply executing the command:


Please consider that in case of a Windows and OS X systems, the Docker daemeon is running inside a Linux virtual machine, therefore you need to replace localhost with the ip address assigned to such virtual machine.


For Lightstreamer experts, another useful check is the one offered by the docker logs command, which fetches and prints on the console the standard output and error present at the time of execution:


Stopping and Removing a Container

The started ls-server container can be stopped through the command:


and finally removed with:

Remember to execute the above commands each time you want to start a container with the same name or the same mapping TCP port.

Ok, now we are sure that our Lightstreamer image has been successfully downloaded and installed, and that all checks have been passed completely, so it's time to go a step further!


For example, you may wonder if it could be possible to customize some of the multiple settings of Lightstreamer even for an server instance running inside a Docker container.
Docker allows to manage data inside and between containers, through Data Volume, which also offers the possibility to mount a directory or a single file from the host machine into a container. By leveraging this feature, a custom Lightstreamer configuration file (/path/to/my-lighstreamer_conf.xml) may be supplied as follows:


In the same way, you could provide a custom logging configuration, maybe in this case also specifying a dedicated volume to ensure both the persistence of log files and better performance of the container:


After launching the container, you might verify how the the /path/to/host directory is getting populated with log files produced by the server.


In the following example we also updated the my-lightstreamer_log_conf.xml file, changing the factory logging path configuration from ../logs to /path/to/dest/logs, which now needs to be specified as additional host directory to mount:

To make full use of the published Official Image, let's explore how you could provide a running container with any Lightstreamer Adapter Set, either developed by yourself or provided by third parties, by employing similar strategies to those illustrated above.

For example, the simplest way to deploy a single custom Adapter Set is to attach its deployment files into the factory adapters folder, as follows:


where /path/to/my-adapter-set is a directory on your host containing the deployment files of your custom Adapter Set.
An interesting exercise could be the deployment of our Hello World Java Adapter. Here the required steps:
Upon the last command, you should see an output similar to:


which attests the correct loading of the Hello World Adapter Set.

But what if you need to plug more custom Adapter Sets onto a running container? Should you list in the command line as many host directories as the Adapter Sets to deploy? Since it might result in a tedious and error prone approach, we need better strategies.
One of them could be a fully replacement of the factory adapters folder with a one located in your host machine, in which you supply all the adapter deployment folders.

Let's see how it works in practice, extending the previous exercise with the aim to deploy the Basic Chat Java Adapter along with the the Hello World Java Adapter. 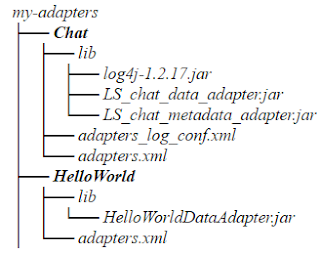 Till now we have seen how it is possible to customize the Official Image in terms of provided configuration and deployed custom Adapter Sets. But there might be some circumstances where you would like provide also custom pages for the internal web server of the Lightstreamer Server.


Even in this case, it is possible to customize the running container by leveraging the same techniques shown above.


For example, with the following command you will be able to fully replace the factory pages folder, which is the web server's root directory:


where /path/to/custom/pages is the path in your host machine containing the replacing web content files.

In order to simplify the management and the deployment of containers started from the Official Image, it could be also possible to execute all the above tasks by deriving a new image, which will include all files needed for the customization.


Let's imagine, for example, that our requirement is to package up a Lightstreamer Server with specific overall and logging configurations, together with a couple of Adapter Sets. How would it be possible to accomplish such goal?


First of all, let's create a new folder which will be the base for our image:


Then, we need to populate this folder with all resources needed to build the derived image:


The last and most important resource to add is the Dockerfile, which will instruct Docker on how to build the image:


The final resulting layout of my-lightstreamer folder will be: Finally, we can build the image by simply running the command:


Pay attention on how we specified the name (my-lighstreamer) and the tag (6.0.0) of the image with the -t parameter, which is useful for later identification in the local repository through the already used docker images command:


All that remains now is launching the container from the newly created image.

and checking that everything is going well, with the familiar docker ps and docker logs commands:

In this blog post we dived into the just published Docker Official Image for Lightstreamer, covering a broad range of usage scenarios.

We showed you how it is possibile to customize practically every aspect of a containerized Lightstreamer Server, exploiting the features provided by the Docker platform.

We also explained how to build a new image starting from the Official one, in order to leverage the great configurability of Lightstreamer from one hand, and to maximize ease of management on the other hand, allowing you to create and handle separated server deployments, each of which focused to serve a specific environment or purpose.

Do not forget to take a look to our source repository on GitHub!