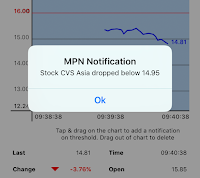 With the upcoming release of Lightstreamer 7.0, and its beta 2 already available for you to test, Mobile Push Notifications APIs jump on the Unified Client API model with SDKs version 4.0, employing a new asynchronous model and delivering all the latest features of iOS and Android push notifications.

In this blog post we take a look at the new APIs, with code examples and use cases for both Objective-C and Java.

Mobile Push Notifications (or MPN for short) are handled by Lightstreamer as an alternative route for real-time updates. This means that they are backed by a subscription and by a data/metadata adapter pair, like any common real-time subscription. This also means that, if you have already integrated Lightstreamer in your service, adding push notifications to your app is a client-only trivial task.

Once an MPN subscription is activated, the Server, instead of sending updates on the session's stream connection, forwards them to an MPN service provider appropriate for the client's platform (APNs for Apple platforms and FCM for Google platforms). MPN subscriptions are stored on an SQL database and consumed directly on the Server, with no need for the app to be online or connected.

The following requirements must be met for Lightstreamer MPN APIs to work properly:

Depending on the lifecycle of the app and the device it's installed on, the token may be subject to a number of events, e.g. expiration, invalidation etc. By saving the device token on a local, restorable storage (NSUserDefaults on iOS, SharedPreferences on Android), both the client SDKs ensure they can handle these events automatically.

So, the first step to use the new MPN APIs is to obtain a device token and create an MPN device object.

Obtaining the Device Token on iOS

Registration for Remote Notifications is usually implemented in the app delegate:


Obtaining the Device Token on Android

You can obtain the token from Firebase:

Once the app has created an MPN device object, it must be passed to the Lightstreamer Server so that it can be registered on its database.

Device registration, like most of the operations in the Unified Client API model, is an asynchronous operation and may be requested immediately after a connection, even if the connection is still ongoing. The request is enqueued and executed as soon as possible.

Connecting and Registering the Device on iOS


Connecting and Registering the Device on Android

Creating and Activating an MPN Subscription

Since updates from an MPN subscription are delivered as push notifications, you have to specify how to map the subscription's fields to the notification payload. With new MPN APIs, you do this by providing directly the JSON structure to be used with the MPN service provider. The structure, that can be set in the notificationFormat property of the MPN subscription, may contain references to fields in the forms ${field_name} (a named argument) or $[field_index] (an indexed argument). These references are replaced by the Server with the content of the update.

To help filling this structure, an MPN builder class has been added that knows the appropriate structure for your MPN service provider and can build the notification format for you. In this way you don't need to dive into the APNs or FCM message format documentation.

Subscribing to an MPN subscription is again an asynchronous operation: it can be requested immediately after device registration, even if the registration is still ongoing. The request is enqueued and executed as soon as possible.

Activating an MPN Subscription on iOS


Activating an MPN Subscription on Android


Other Features of MPN Subscriptions

MPN subscriptions are based on real-time subscriptions, and as such they employ similar semantics. E.g. you can specify one item, multiple items or a group ID, a schema name or a list of fields, a maximum frequency, a buffer size etc.

However, if you specify the coalescing flag as YES/true during activation, the MPN subscription is coalesced into any existing one that has the same base parameters.

On the other hand, if your app needs a variable set of MPN subscriptions, you need to verify which is already active and which is not, before activating new ones. More on this later.

Trigger expressions are valuable tools in situations where you would need additional logic on the adapter to implement decisions that are specified on the client. Some examples:

Adding bits of logic like these on the adapter side requires a measurable effort and a rolling restart of the Server, while specifying them as simple expressions on the client-side, directly on the MPN subscription, is trivial.

Trigger expressions must be specified as a string containing a Java language boolean expression, even on the iOS platform. It can include references to fields in the form of named or indexed arguments, evaluated as strings. The expression can be set with the triggerExpression property of the MPN subscription. Syntax verification, compilation and evaluation are performed on the Server.

The examples above could be specified as follows:

As you see, possibilities are endless.

Since new MPN APIs are asynchronous, inquiry operations of old MPN APIs are now no more necessary. They have been replaced by events that notify when the list of existing MPN subscriptions is available, and a property on Lightstreamer client object, MPNSubscriptions, to access them.


MPN subscriptions can be modified in place, without the need to first unsubscribe them, by using the copy constructor. The copy inherits the unique ID of the MPN subscription, and when it is submitted for activation through the Lightstreamer client object, the Server uses its properties to update the existing subscription.

The metadata adapter maintains its role of authentication and authorization of MPN operations also with Server version 7 and new APIs. The 3 events related to MPN are the following:

The purpose of the 3 events is unchanged compared to Server 6.x. The only difference is the addition of sessionID in the method signature and the elimination of platform-specific subclasses of MpnSubscriptionInfo (this object now provides the same notificationFormat property found on the client, subclasses are no more needed).

This notification provides a chance to authorize a user to access to a certain device, specified by:

For instance, here you can cross-validate the device token with an external database.

This notification provides a chance to validate the parameters of the MPN subscription, including:

For instance, if a certain item must be visible via real-time subscriptions but not via push notifications, this is the correct place to check and block its access.

This notification provides a chance to authorize a token change by a certain user on a certain device. The device is specified by platform, token and app ID.

For instance, here you can cross-validate the new device token with an external database before accepting it.

The General Concepts document, included in the Server distribution, has an updated and expanded chapter 5 dedicated to MPN. Here you can find details about:


Have a look before starting your integration journey.

The MPN Stock-List demos for iOS and Android have also been updated to the new APIs and are available on GitHub:

Their distributions on the corresponding app stores have also been updated and are available for you to test.

These platforms support push notifications, although some limitations.