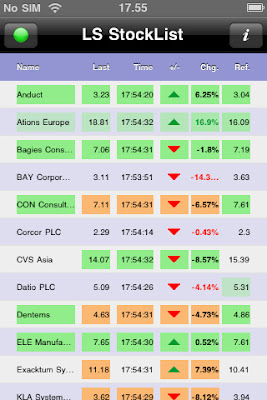 Next Lightstreamer version, codename Duomo, will have many new exciting features, including some brand new client APIs. We now directly cover all the mobile app technologies out there, including iOS. We have recently published on Apple Store a simple iOS application that is a good example of how to leverage the iOS Client API for Lightstreamer inside an Objective-C application.

Previously, to develop iOS applications that could receive real-time data from Lightstreamer Server you had to use a third-party client library. Now we provide our own officially supported API.

The new example, provided with full source code, shows a simple grid updated in real-time with market data generated by Lightstreamer Server. Such application automatically adapts to both iPhone and iPad.

A preview release of Lightstreamer 4.0 (Duomo), including the new iOS SDK, is already available. The final release is expected soon!
Posted by Alessandro Alinone at 5:17 PM

Email ThisBlogThis!Share to TwitterShare to FacebookShare to Pinterest
Labels: ANNOUNCEMENTS